Launching in the Traumpalast Multiplex in Leonberg, The Record-Breaking Screen Will Open with the Highly Anticipated Premier of the Latest James Bond Entry "No Time to Die" - The First Bond Film Ever to Feature Select Sequences Shot with IMAX Film Cameras

and LEONBERG, , /PRNewswire/ --  (NYSE: IMAX) and Lochmann Filmtheaterbetriebe today announced that the largest IMAX screen in the world is scheduled to open to the public on at the Traumpalast Multiplex in Leonberg, . Measuring 21.03 meters high and 38.16 meters wide – wider than a Boeing 737 airliner – the record-breaking screen will fittingly kick off with the premier of the latest entry, "No Time to Die", featuring select sequences shot with IMAX film cameras. 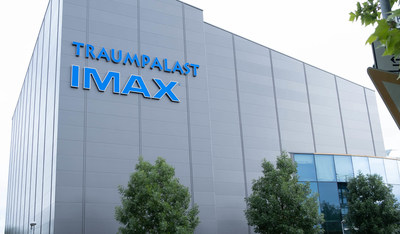 The theatre will feature groundbreaking IMAX with Laser technology as well as IMAX's 12-channel sound technology with new side and overhead channels that deliver greater dynamic range and precision for the ultimate in audio immersion. The screen for the 574-seat IMAX at Traumpalast also weighed in at an over 500 pounds, another IMAX record, and had to be painted by a specially designed robotic arm.

"The IMAX at Traumpalast redefines the 'big screen'," said , CEO of IMAX. "With Lochmann Filmtheaterbetriebe, we've created an unforgettable moviegoing experience where fans can truly immersive themselves in the world's biggest blockbusters on the world's largest screen. As we continue to grow in and open new iconic locations around the world, the IMAX at Traumpalast will become an exciting flagship location at a critical time for fans seeking premium, differentiated experiences."

"Audiences in and beyond will travel far and wide to see the IMAX at Traumpalast, from its enormous screen and incredible audio to the luxurious seating and other exciting amenities the theatre has to offer. We're proud to partner with IMAX on this new, record-breaking location and can't wait to start letting fans in the door," said Marius and .

Shot with IMAX's iconic 15/70mm film cameras by visionary director , and specially formatted for IMAX theatres, "No Time to Die" features 40 minutes of IMAX exclusive expanded aspect ratio. The film is the first Bond entry ever to have been shot with IMAX film cameras, considered the highest quality cameras in the world. For audiences immersing themselves in IMAX at Traumpalast, the film will also showcase the IMAX-exclusive 1.90:1 aspect ratio, enabling moviegoers to experience up to 26% more picture for the film for those selected sequences.

The addition of IMAX at Traumpalast marks the eighth theatre for IMAX in . IMAX has steadily grown its box office in the market over the last several years, with its highest box office year so far coming in 2019.

IMAX is headquartered in , , and , with additional offices in , , , and . As of , there were 1,654 IMAX theater systems (1,569 commercial multiplexes, 12 commercial destinations, 73 institutional) operating in 85 countries and territories. Shares of IMAX China Holding, Inc., a subsidiary of , trade on the under the stock code "1970."

Lochmann Filmtheaterbetriebe consists of the eight Traumpalast cinemas in Schorndorf, Waiblingen, Backnang, Schwäbisch Gmünd, Leonberg, Esslingen, Nürtingen and Biberach as well as the Löwenlichtspielen Rudersberg and the Passage . The medium-sized cinema chain of founder and managing director is enjoying steady growth, followed in autumn 2021 by the IMAX centre in Leonberg, where the largest screen in the world has been installed. In addition to current top films, the Traumpalast cinemas also offer a culturally sophisticated film programme. At the heart of the cinema experience in all Lochmann cinemas is the special feel-good concept, which is embodied, for example, by artistic murals or particularly comfortable lounge cinema chairs. Always being technically up to date is another claim that distinguishes Lochmann Filmtheaterbetriebe. You can find more information at www.traumpalast.de as well as on Facebook and Instagram.