, /PRNewswire/ -- The summer blockbuster season roared to life in the , as IMAX (NYSE: IMAX) delivered a monster domestic opening weekend for "A Quiet Place Part II" on 361 screens. Despite accounting for less than 3% of total screens, IMAX captured 9% of the film's domestic box office as the Company delivered its biggest opening weekend of the pandemic era. 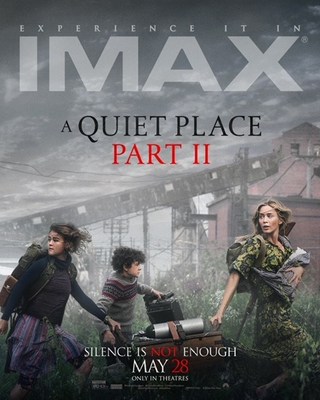 Reported overall box office for "A Quiet Place Part II" exceeded the opening weekend for the original film — a remarkable result made even more impressive given that social distancing measures remain in place across key markets. For instance, even though and have eased capacity limitations in theaters, social distancing guidelines currently limit capacity to a maximum of 40% in IMAX theaters in and .

"'A Quiet Place Part II' is the first domestic release this year to cross the threshold from 'great opening weekend given the pandemic' to 'great opening weekend, period' — offering undeniable proof that the domestic box office is back" said , CEO of IMAX. "The film's stellar results give the box office a strong jolt of momentum heading into the summer, and the many blockbusters that held out for an exclusive theatrical release stand to benefit."

Globally, "A Quiet Place Part II" earned a total of in markets as it opened in additional select markets internationally, including . IMAX delivered in box office across its entire global network for the weekend, buoyed by an additional in receipts from Universal's "F9" in .

IMAX is headquartered in New York, Toronto, and Los Angeles, with additional offices in London, Dublin, Tokyo, and Shanghai. As of December 31, 2020, there were 1,650 IMAX theater systems (1,562 commercial multiplexes, 12 commercial destinations, 76 institutional) operating in 84 countries and territories. Shares of IMAX China Holding, Inc., a subsidiary of , trade on the under the stock code "1970."