Pair of Engagements to Premiere () and () in Select IMAX Theaters Globally

Tickets for RENÉE FLEMING'S CITIES THAT SING - Available for Purchase

, /PRNewswire/ -- (NYSE: IMAX) and Stage Access today announced a pair of film experiences featuring Grammy®-award winning soprano , as she performs iconic favorites and tours some of the greatest musical cities of the world. Cities That Sing - and Cities That Sing - will premiere in select IMAX® theaters globally on and , respectively. 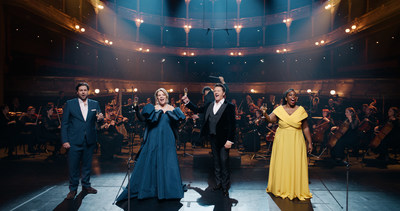 Both films are Stage Access productions, Filmed for IMAX using IMAX-certified cameras and feature exclusive performances showcasing these great cities as never before seen through the eyes of one of the world's greatest opera stars. Stroll along with Fleming and her contemporaries as they explore unique art, history, cuisine, and music.

On , one time only, will participate in a live conversation, which will be simultaneously broadcast across the IMAX LIVE connected network to participating theaters globally. Audiences from around the world will have the opportunity to ask questions of Fleming live.  Actor and producer will moderate the discussion with Fleming at from AMC Lincoln Square IMAX® theater.  Additional showtimes for Cities That Sing -  will occur on .

Tickets for all Cities That Sing -  showtimes will be available for purchase beginning at tickets.imax.com. Tickets for the engagement will go on sale at a later date. The trailer can be found here.

Additional details for along with additional Cities That Sing destinations to be announced in the coming months.

"My life has taken me to some of the most magical cities around the globe, with legendary opera houses and centuries of musical history," said . "It's thrilling to bring these places — and their glorious music — to audiences with the immersive power and scale of IMAX."

Cities That Sing -  will feature a performance from Fleming at the historic Théâtre du Châtelet. Fleming is joined on stage by special guest star, the world-renowned tenor and featured performers and as they perform well-known opera selections with connections to . As they tour famous locations in , Fleming takes audiences through the beloved city to locations that influence arts and culture and most importantly those with a personal connection to her. She is joined by leading Couturier and acclaimed Director in this love-letter to the culture of and the music born from it. Cities That Sing -  is directed by and produced by and . Executive Producers are , and .

In Cities That Sing - , Fleming welcomes star Italian tenor , with baritone and mezzo on the world-famous stage of  . Home to many well-known opera premieres, La Fenice - or The - is the backdrop for some of opera's most famous and enduring works. Set amongst the romantic canals, Fleming explores the city's incomparable landscape and visits some of her favorite Venetian destinations, both by land and by sea.   Along her journey she is joined by La Fenice's Artistic Director, , and the orchestra's Conductor, .  returns as Director as well as Producers and . Executive Producers are , and .

"We are honored to have been able to create this remarkable series reinventing how classical music can be enjoyed and connected to culture in the most immersive of experiences with the incomparable ," said , Founder and CEO of Stage Access, which produced both unique film experiences. "Fleming's ability to connect with audiences as both a performer and host is unmatched along with the intimacy and scale of IMAX."

"It is an honor to collaborate with on this groundbreaking series that will bring the grandeur of her music and these unforgettable cities to life in IMAX for the first time," said , President of . "We can't wait to take fans on an immersive musical journey across some of the world's most richly historied cities through the unrivaled sight and sound of IMAX."

American soprano is one of the most beloved and celebrated singers of our time. Winner of four Grammy® awards and the US National Medal of Arts, Renée has sung for momentous occasions from the Nobel Peace Prize ceremony to the Diamond Jubilee Concert for at . She is the only classical artist ever to have performed the US National Anthem at the .

IMAX LIVE is bringing a differentiated offering to the market by connecting IMAX® theatres via a high-speed network capable of simultaneously broadcasting events and experiences of all kinds worldwide. Cities That Sing -  and Cities That Sing -  are the latest in IMAX LIVE's music series, following a presentation of Halsey's musical film If I Can't Have Love, ; and two sold-out concert experiences in support of latest studio albums Donda and Donda 2. IMAX LIVE has also hosted a number of exclusive film screenings featuring conversations with participating filmmakers and talent, including (The Beatles: Get Back - The Rooftop Concert); (Nope); and (The Tragedy of Macbeth); and , , , and (Jurassic World Dominion). This year, IMAX LIVE expanded into the gaming landscape, with Summer Game Fest Live! and the upcoming The Game Awards airing live in IMAX® theatres for the first time in December.

IMAX is a premier global technology platform for entertainment and events. Through its proprietary software, theater architecture, patented intellectual property, and specialized equipment, IMAX offers a unique end-to-end solution to create superior, immersive content experiences for which the IMAX® brand is globally renown. Top filmmakers, movie studios, artists, and creators utilize the cutting-edge visual and sound technology of IMAX to connect with audiences in innovative ways. As a result, IMAX is among the most important and successful global distribution platforms for domestic and international tentpole films and, increasingly, exclusive experiences ranging from live performances to interactive events with leading artists and creators.

IMAX is headquartered in , , and , with additional offices in , , , and . As of , there were 1,694 IMAX theater systems (1,610 commercial multiplexes, 12 commercial destinations, 72 institutional) operating in 87 countries and territories. Shares of IMAX China Holding, Inc., a subsidiary of , trade on the under the stock code "1970."

IMAX®, IMAX® Dome, IMAX® 3D, IMAX® 3D Dome, Experience It In IMAX®, The IMAX Experience®, An IMAX Experience®, An IMAX 3D Experience®, IMAX DMR®, DMR®, Filmed For IMAX™, IMAX LIVE™, IMAX Enhanced™, IMAX nXos® and Films to the Fullest®, are trademarks and trade names of the Company or its subsidiaries that are registered or otherwise protected under laws of various jurisdictions. More information about the Company can be found at www.imax.com. You may also connect with IMAX on Instagram (https://www.instagram.com/imax), Facebook (www.facebook.com/imax), Twitter (www.twitter.com/imax) and YouTube (www.youtube.com/imaxmovies).

Renée Fleming is one of the most acclaimed singers of our time, performing on the stages of the world's greatest opera houses and concert halls. Honored with four Grammy® awards and the US National Medal of Arts, Renée has sung for momentous occasions from the Nobel Peace Prize ceremony to the Diamond Jubilee Concert for at . A ground-breaking distinction came in 2008 when Renée became the first woman in the 125-year history of the to solo headline an opening night gala. In 2014, she brought her voice to a vast new audience as the only classical artist ever to sing The Star-Spangled Banner at the . Known for bringing new audiences to classical music and opera, Renée has starred in and hosted an array of television and radio broadcasts. She has sung with great artists ranging from and to , , , , and . Renée's voice is featured on the soundtracks of Best Picture Oscar winners The Shape of Water and The Lord of the Rings. In November, she will star in the world premiere staging of The Hours, a new opera based on the award-winning novel and film, at the .

Stage Access is defining the performing arts in the digital era as the only company in that produces, distributes, and licenses classical arts programming across multiple platforms, including a theatrical relationship with IMAX. With a mission of Bringing the Stage to You®, the company's own fast-growing STAGE ACCESS on-demand streaming service is available online and for iOS, Android, AppleTV, Amazon Fire and Roku, and is a leading producer of acclaimed original programs, including , Six Solo Bach Cello Suites from the Odeon, ; and The 3 Tenors: From Caracalla to the World, The 30th Anniversary Documentary. Across all Stage Access platforms, Emmy® Award-winning performer serves as host for new major programming, including such exclusive collections as the Rossini Opera Festival. Stage Access was founded by CEO , and serves as the company's COO. For more details, visit www.StageAccess.com. 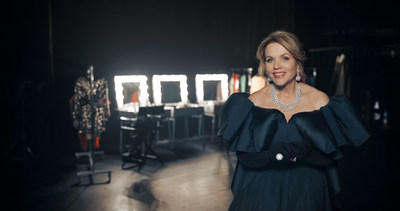