and , /PRNewswire/ -- AEON Entertainment and (NYSE: IMAX) today announced plans to expand their partnership with an agreement for two new, state-of-the-art IMAX® with Laser systems in . Both new systems will be located at prime retail complexes in thriving suburbs of major Japanese cities, including the AEON Cinema Ichikawa Myoden outside and AEON Cinema Shijonawate near . 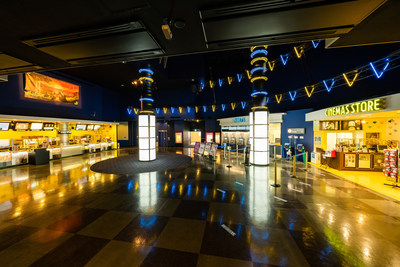 The deal marks a significant step forward for IMAX and AEON — one of the major exhibitors in — at a time when IMAX is driving remarkable growth in the market across its network, box office, and local filmmaking partnerships. IMAX has tripled its network in over the last ten years, from just 13 screens in 2011 to 39 today. With more than , was IMAX's third highest grossing global market in 2021, with eight of the Company's top 15 highest grossing theaters. Furthermore, is the only IMAX market with more than ten theaters to have an overall per screen average of more than in 2021.

"We are excited that our expanded partnership with IMAX — an innovative technology for groundbreaking cinematic experiences — will drive even more value for our theatres," said Mr. , President and Representative Director, "We will continue to enhance our state-of-the-art facilities and services as part of our mission to deliver a variety of exciting experiences to our customers."

"From its growing global blockbuster portfolio to outsized box office returns, is a thriving market for cinema with some of the most passionate IMAX fans in the world," said , CEO of IMAX. "We are excited to expand our partnership with AEON, one of the world's premier exhibitors, and continue to grow IMAX as a premier destination for entertainment and events in and around the globe."

IMAX's momentum in has been driven in large part by its local film strategy, with IMAX earning a record in global box office with Japanese language releases in 2021 — up from in 2017. Japanese anime has emerged as a particularly strong growth area for IMAX, from the recent "Jujutsu Kaisen 0" to 2020's "", the highest grossing IMAX film of all time in Japan.  Upcoming Japanese titles releasing in IMAX include Toho's "Detective Conan: The Bride of " on and "Shin-Ultraman" on , and Toei's ": Super hero".

The new locations will be equipped with IMAX with Laser, IMAX's most advanced theatre experience. Immersive by design, IMAX with Laser has been developed from the ground-up to deliver crystal clear, lifelike images and precision audio for a moviegoing experience unlike anything else. It is set apart by a groundbreaking 4k laser projection system that features a new optical engine, custom designed lenses, and a suite of proprietary technology that delivers brighter images with increase resolution, deeper contrast, and the widest range of colors exclusively to IMAX screens.

IMAX is headquartered in New York, Toronto, and Los Angeles, with additional offices in London, Dublin, Tokyo, and Shanghai. As of December 31, 2021, there were 1,683 IMAX theater systems (1,599 commercial multiplexes, 12 commercial destinations, 72 institutional) operating in 87 countries and territories. Shares of IMAX China Holding, Inc., a subsidiary of , trade on the under the stock code "1970."