"Venom: Let There Be Carnage," "No Time to Die" and China's "The Battle of Lake Changjin" Lift IMAX to Biggest Global Weekend at the Box Office Since 2019

, /PRNewswire/ --  (NYSE: IMAX) soared to at the global box office this weekend, delivering its best October weekend ever at the box office and its biggest global weekend tally since . In the clearest sign yet that global moviegoing is back, the record-breaking results were driven by a diverse slate of blockbuster films drawing big audiences across , , the , , and . 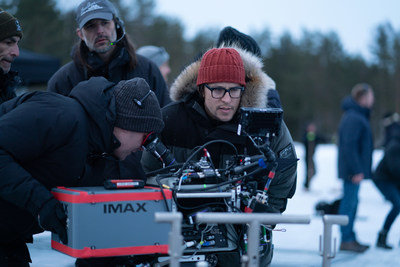 Sony/Marvel's "Venom: Let There Be Carnage" crushed expectations with a debut IMAX screens in and — good for 9.5% of the film's overall weekend haul. The film's gross on 402 IMAX screens in marked the company's best Friday through Sunday domestic opening weekend of the pandemic era.

Sony/ "No Time to Die" — the first major blockbuster delayed due to the pandemic — made a triumphant international debut, earning across 284 IMAX screens in 50 international markets. The first film shot with IMAX film cameras, "No Time to Die" scored the best IMAX opening weekend ever for the storied spy franchise in 24 countries worldwide, including , , , , , , , , , , and more. The debut also earned pandemic era best opening weekends in 21 countries. The film arrives in North American IMAX theaters on .

"This weekend was an unqualified success, proving what today's box office is capable of — not just with select regions or releases, but with a diverse offering of great content across every key region," said , President of . "The perception may be that these films are overperforming, but the reality is that many people are underestimating just how excited global consumers are to get back to the movies."

The Chinese box office continued its remarkable resurgence with an enormous opening weekend for the annual National holiday. A trio of local language releases delivered in box office for the weekend, led by the historical war epic "The Battle of ," which debuted to .

The strong fall blockbuster slate continues as Warner Bros./Legendary's "Dune" debuts in the IMAX network in and on and /Marvel's "Eternals" arrives in IMAX theaters worldwide on .

IMAX is headquartered in , , and , with additional offices in , , , and . As of , there were 1,654 IMAX theater systems (1,569 commercial multiplexes, 12 commercial destinations, 73 institutional) operating in 85 countries and territories. Shares of IMAX China Holding, Inc., a subsidiary of , trade on the under the stock code "1970."